Birthday dinner with my girls…captured by my gir

Watching a storm roll into NYC. This came through

Such a fun day riding our bikes through NYC. Save

Quick blog post on our stay at the @conradnymidtow

Come check out NYC via boat with me! This was such 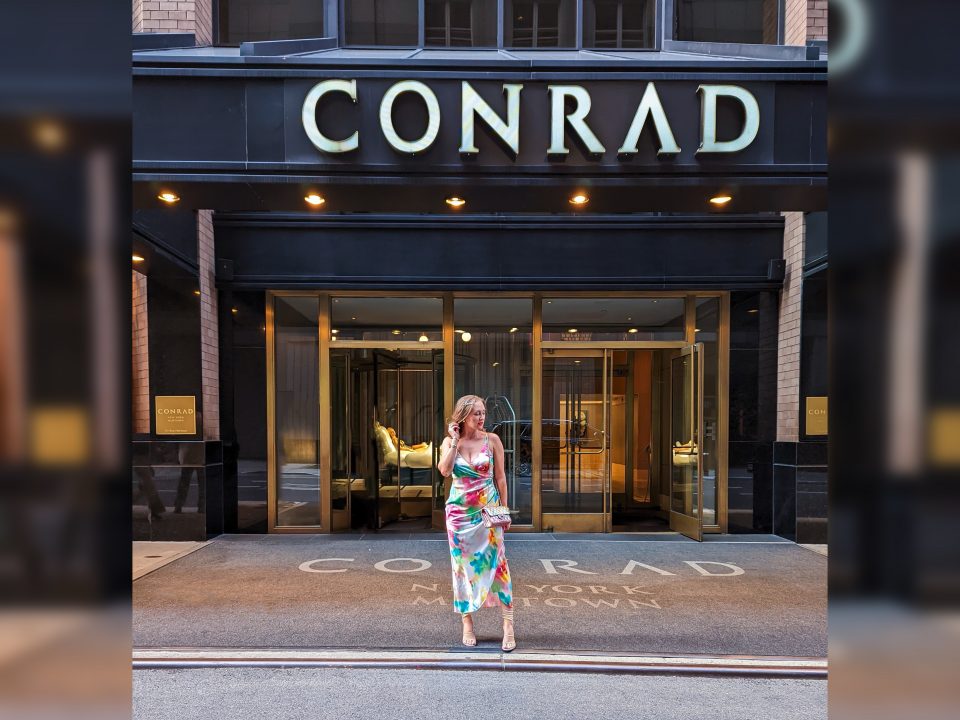 We recently took a quick trip to NYC to celebrate my birthday. There are many amazing (and not so amazing) hotels in the city; it was super intimidating settling on one!

The Conrad New York Midtown is a 54-floor luxury hotel in the center of NYC. It boasts one of the largest fitness centers in the area and is within walking distance of some of the main attractions in the city. One of the big reasons I selected this hotel was because they partner with our American Express Platinum credit card, and therefore we get a ton of perks. This includes complimentary breakfast, hotel credit, early check-in (not guaranteed), and late checkout.

The hotel is within walking distance (usually about 5-10 minutes) of Central Park, Times Square, and Rockefeller Center. Also in the area: the Late Show with Stephen Colbert, the Original Soup Kitchen (from the Soup Nazi episode of Seinfield), Carnegie Hall, The Plaza Hotel, St. Patrick’s Cathedral, and 5th Avenue Shopping. We mainly got around by walking and riding bikes. Two bike stations a few blocks from the hotel made it easy to get around, especially if we wanted to go a little further.

Lower Manhattan was about 30 minutes away whether you were biking, driving, or on the subway. This wasn’t an issue for us, but keep in mind that a cab or Uber ride one-way averages about $20-$30.

We booked a One Bedroom Suite with a City View. Our flight landed in NYC at 10 a.m., so I reached out to the hotel (via the Hilton app) in advance to see if they would be able to accommodate the AMEX perk of early check-in. They said it wouldn’t be a problem.

Once we arrived at the hotel, it wasn’t that easy. The room we digitally checked into also had a late checkout, and they couldn’t get us in early. The front desk told us a few different things, at first that the room was being cleaned as we speak, but an hour later, we found out that the guests had actually not checked out. This was a bit frustrating. We had selected a room on the 50th floor, with a corner view, but were offered a room on the 26th floor, which I can’t imagine has excellent “city views.” Either way, after about an hour and a half of waiting, they found us another room on the 50th floor, but it wasn’t a corner. We still appreciated that they were able to get us checked in around 1230, much earlier than usual. It was just a bigger hassle than expected.

The room itself was beautiful! Clean and very spacious, especially for NYC. We had a separate sitting area with a sofa, table, and chair. We also had a small hallway that housed an armoire with a mini fridge and complimentary in-room coffee. They had a kettle for tea, which as an avid tea drinker, I appreciated very much! I’ve never seen a hotel with a dedicated tea kettle; the boiling water from the Keurig always tastes like coffee! The bed was comfortable and was across from another table with chairs, as well as a closet. The bathroom was massive and beautiful! Lots of marble, a huge mirror and even a stand alone vanity (not pictured). The shower, as with the rest of the room, was huge, and the pressure from the shower heads was so intense that I felt like I could barely hold on to the portable shower head. One thing I wish they did include in the room was a double sink. The bathroom counter was long and had room for another sink. I feel this would have made better use of the space, but I’m not a bathroom designer.
In addition to the in-room coffee/tea, we had two robes, two pairs of slippers, a hair dryer, an iron, and bath accessories.

Our room view wasn’t awful, but nothing special. We were basically blocked by the building in front of us, but had some slivers of city views. Definitely think the corner room would have been better.

One design flaw I will point out is that the bed was right near the air conditioning, meaning as soon as you get into bed, you could feel the AC blowing directly at your face while sleeping. It was super strong since it was about 100 degrees while we were there. My husband had to cover the vent with a box every night, so we didn’t have cold air blowing at our faces. For such a nice luxury hotel, this is a flaw. I’m not sure if all rooms are like this way, but hoping it was just ours.

The hotel houses one restaurant/bar in the lobby, open for breakfast, lunch, and dinner. They also offer in-room dining, which we took advantage of every morning for breakfast. The breakfast menu is relatively small, and the food was decent, but we only ordered it daily as it was included with our stay. With how expensive things are in NYC, I was impressed that the Conrad had free mini water bottles out almost daily for its guests. Unlike hotels in cities like Las Vegas, where I paid $50 for two in-room water bottles. In addition to water at the front desk, they also had free Fiji bottles in the room.

Also, the hotel generously sent me a complimentary bottle of Champagne, balloons, and a dessert for my birthday.

I was hoping to try out the fitness center since they say it is the largest in the area, but honestly, we walked and biked so much that I was exhausted by the end of the day! Overall, I think the hotel is great! The location was excellent, and the room was beautiful (besides the minor flaw)! We very much appreciated the level of service and attention and would stay at the Conrad again!

This review is my own thoughts and is not sponsored or affiliated with Hilton/Conrad in any way. 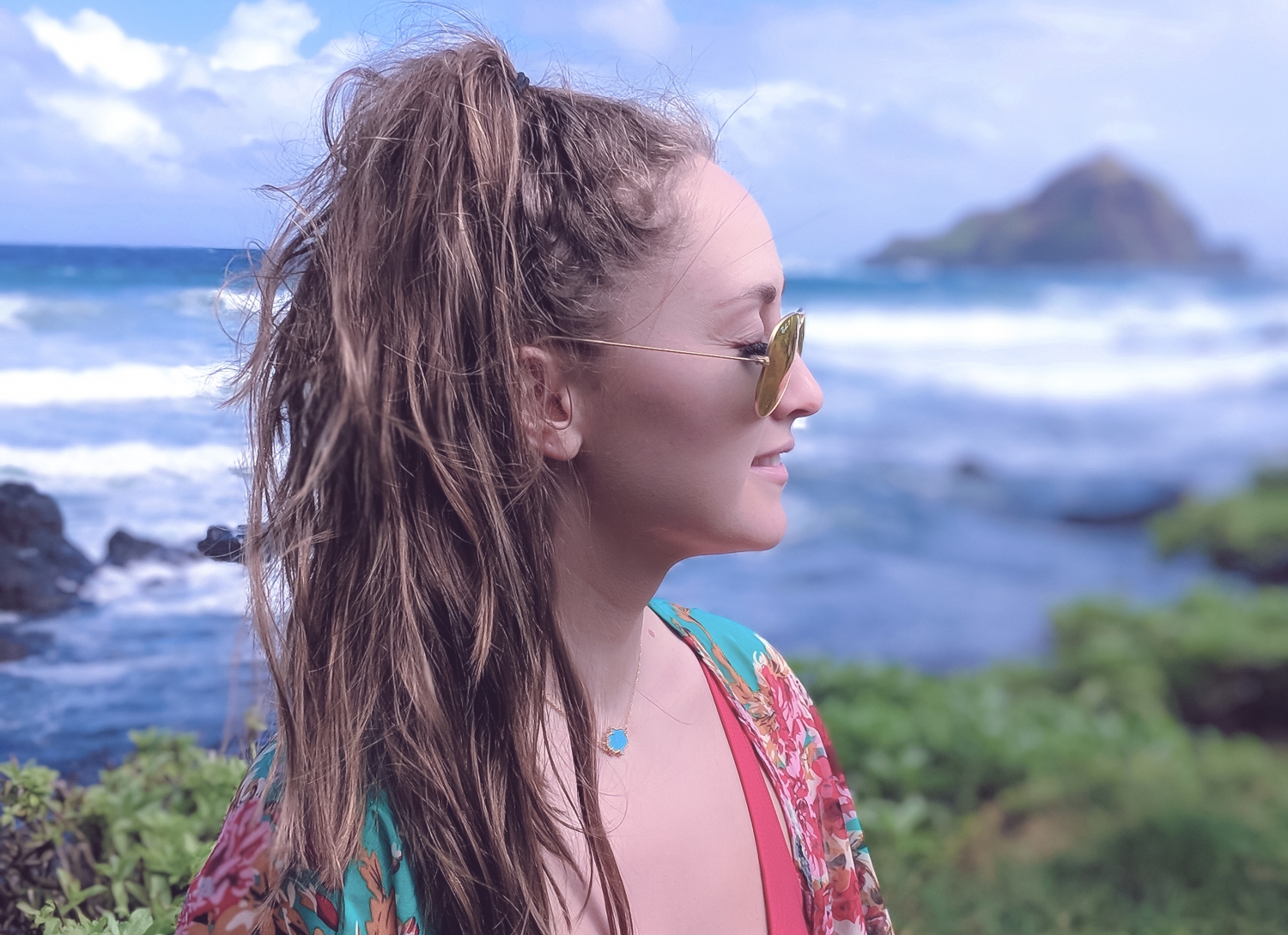