When I was pregnant, looking for breast pumps, I was super overwhelmed with all of the choices. I asked several of my girlfriends and ended up settling on a Spectra S1 as my insurance pump. While the S1 is a great pump and I’ve been happy with it. I can’t imagine lugging it to work and back (even though it is battery powered). Even worse, I can’t imagine traveling with it, so I decided to try out the Freemie Liberty Pump.

I purchased the pump at Bed Bath and Beyond, but it is also available on Amazon. The sister pump, the Freemie Independence, is covered with most insurances. The pumps are pretty much the same, besides the screen. The Liberty comes with an LED screen, and the Independence does not. Otherwise, power and output are the same. The Liberty retails for $299, but you can usually find it on sale, or use a coupon.

Based on my research, there were a ton of mixed reviews on the Liberty pump, so I was a bit nervous. On the flip side, my friend uses the Freemie cups with her Spectra pump and loves them! I figured if the pump itself doesn’t work, I could at least use the cups, worst case scenario. The Liberty comes with the closed system Freemie cups, which are only sold on the Freemie site. Right now, all of the other retailers are selling the open system, which makes it a bit trickier to use with pumps like the Spectra. You have to purchase an additional piece. The nice thing with the closed system is that you can easily set it up with other closed system pumps like the Spectras and the Baby Buddha. 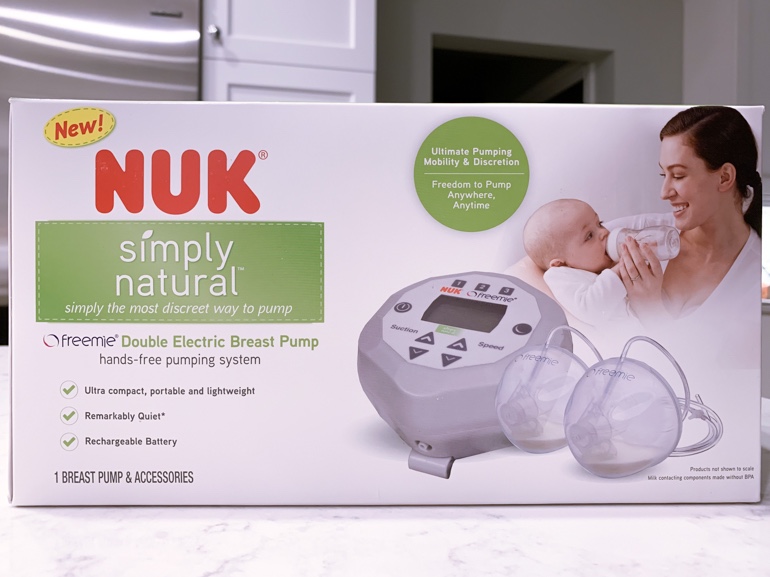 The pump itself is small and fits in the palm of my hand. It comes with three bottles, two sized flanges (24mm and 28mm), a USB charger and plug, ducks, valves and Freemie 21 mm inserts.

There are five parts you have to clean, verses 3 with my Spectra, which is a bit more time-consuming, but the ability to be hands-free while pumping is worth it.

With my Spectra, I typically pump for about 10 minutes, on a 2-3 vacuum and I can get anywhere from 5-8 ounces combined depending on the time of day.

Since the Liberty doesn’t have stimulation and expression modes preset, it is recommended to start the pump at a speed of 10 and a suction of 10 until you feel your let-down. The pump allows you to set 3 memory modes, so I automatically set this to preset 1. This way, when I turn the pump on, instead of going from speed 1 and suction 1 all the way up to 10, I can start at my preset 1 for “stimulation mode”.

My first try with the Liberty, I started at the 10/10 settings and then went down to 4/4, as it seemed comparable to my Spectra. I played around with the settings, and after 18 minutes of pumping (almost double my regular amount), I only got 1.5 ounces COMBINED! TERRIBLE! I had to finish pumping with my S1, and I got 2.5 ounces on my left side within 6 minutes. I was pretty disappointed with the Liberty but wanted to try it out a few times before I made up my mind.

The next night, I decided to test the Liberty pump with my Spectra flanges. This was easy to set up since both are closed systems. To do this, I took the cords for my Spectra flanges and plugged them into the Freemie Y connector. I wanted to see whether it was the Freemie cups that weren’t working for me, the actual pump, or user error. Based on the technical specifications, it shouldn’t be the pump since it has a suction similar to the S1, and many people love the Freemie cups, so it was most likely user error.

Once I set up my Spectra flanges on the Liberty pump, I was able to express 6.5 ounces within 12 minutes! I was thrilled! I started again at a speed of 10 and a suction of 10 until I felt a let-down, which was about a minute (just like my Spectra). Then I proceeded to pump at a speed of 6 and a suction of 6. I played around a bit with the settings again and still felt like my milk was coming in nicely at a suction of 4 and speed of 5, as well as 5/5 for both. This told me that it was most likely the Freemie cups that I didn’t set up correctly.

The third night, I gave the Freemie cups and the Liberty pump another shot. I decided to hold the Freemie cups in place, to figure out alignment and play with the pressure. It was easier to pump on one side instead of both while testing this out. With the same settings as above, I was able to produce just under 3 ounces on my left side in 12 minutes, again typical output. What I realized was that the nursing bra I had on the first night did not properly hold the Freemie cups for me. I was wearing a Kindred Bravely nursing bra, which I typically love (especially for sleep), but it just wasn’t applying the appropriate pressure for the cups. The Freemie pump instructions mention a few times that they recommend a sports bra for the Freemie cups, which makes sense.  I’m not interested in wearing a sports bra daily and definitely not o work. I ended up trying the Freemie cups with My normal day nursing bra. Once I figured this out, the pump worked great! My output was almost identical to my Spectra S1.

I took the pump to work a few times and had no issues. At the office, I pumped for about 20 minutes and was able to produce 10 ounces with my Freemie Liberty.  The pump is quiet, much more so than my Spectra S1. My colleagues couldn’t hear it, nor could any customers on the phone. The pump allowed me to be hands-free, which is key while working. I typically pump twice a day while in the office, and if I weren’t hands-free, I would lose 40 minutes of work each day. Since the Freemie cups are big, I typically throw on a sweater while pumping and it isn’t as noticeable. The pump is much more visible with a tank top or thin shirt. 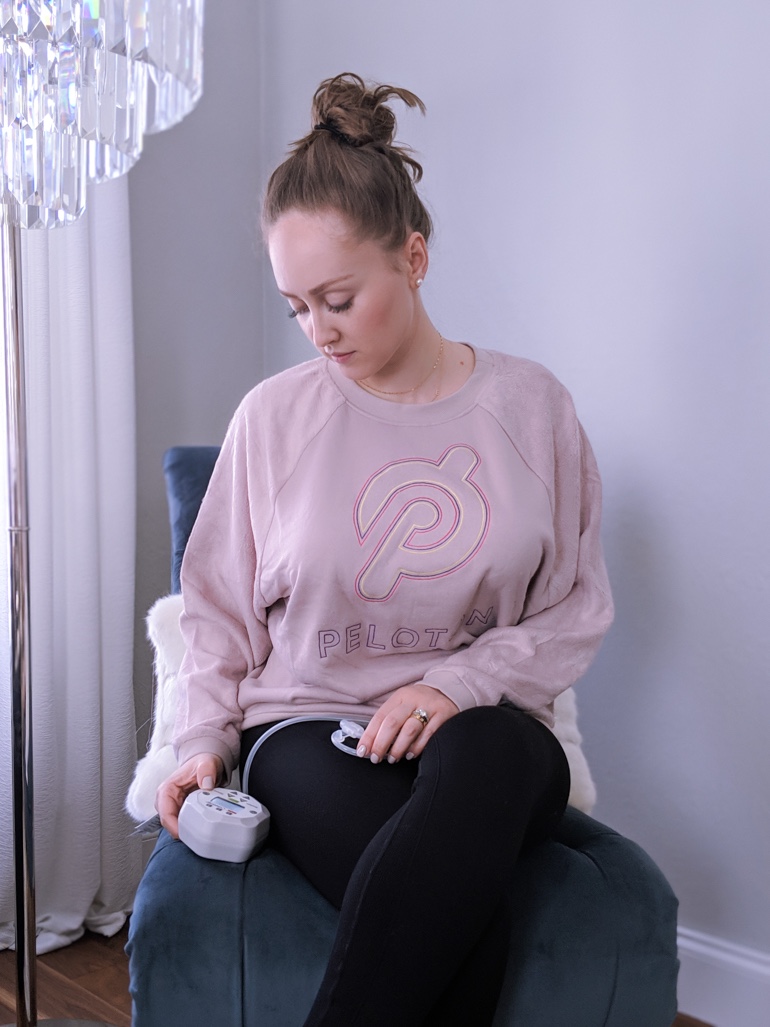 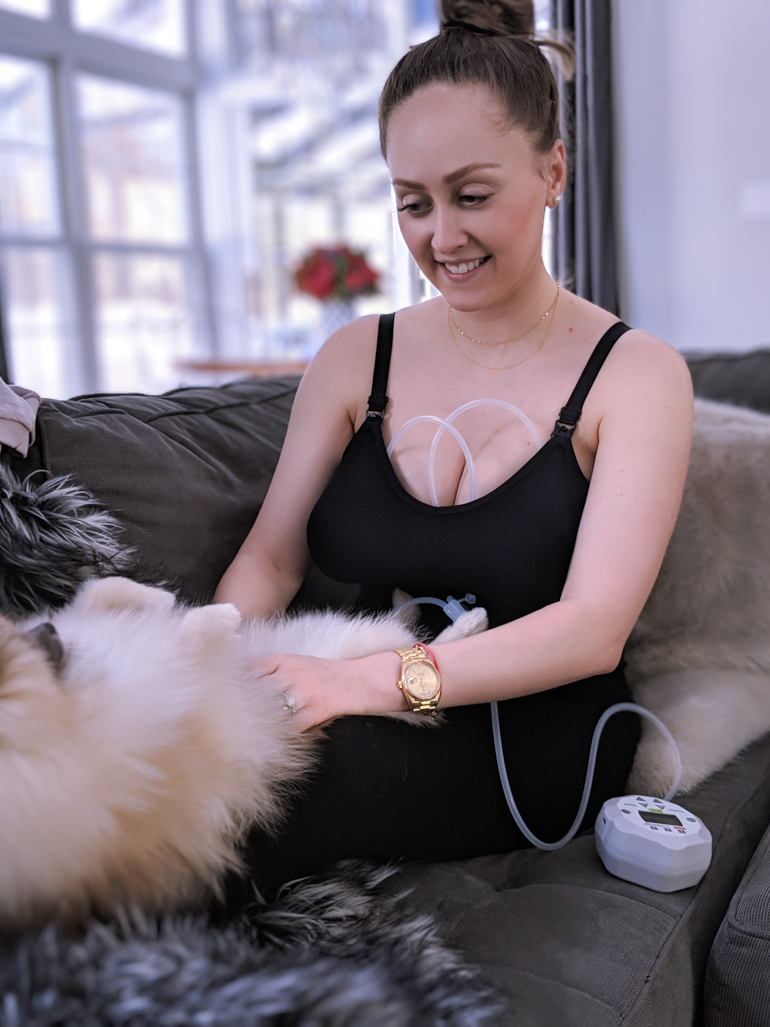 Overall, I am happy with the pump. It does come with a slight learning curve, so don’t give up. Now that I know how to properly set up the Freemie cups, I think this pump is a solid choice for a handsfree option. I think the suction level is great, especially for such a little pump. Besides stimulation, I never had to use the pump above a suction and speed of 6.

I love that the Freemie cups hold 8 ounces on each side! This is a huge capacity and perfect for twin moms or over suppliers. Most pumps don’t hold more than 4-5 ounces per side.

One thing I found challenging with the Liberty was seeing how much I pumped while wearing it. The cups get a bit foggy, so you don’t have a handle on this until you are done. This is not a deal breaker, but worth noting.

There are several other mini pumps on the market, but I loved the fact that the Freemie Liberty was pretty discreet, handsfree, quiet, and powerful. I think it is an excellent option for those looking for a secondary pump to take to work, travel with, or be able to get some work done around the house.

Let me know if you have any questions!

My name is Marina Vygodner. I’m a travel addict from Milwaukee, WI. I’m excited to share my knowledge, thoughts and personal photos from my adventures around the world on this blog.